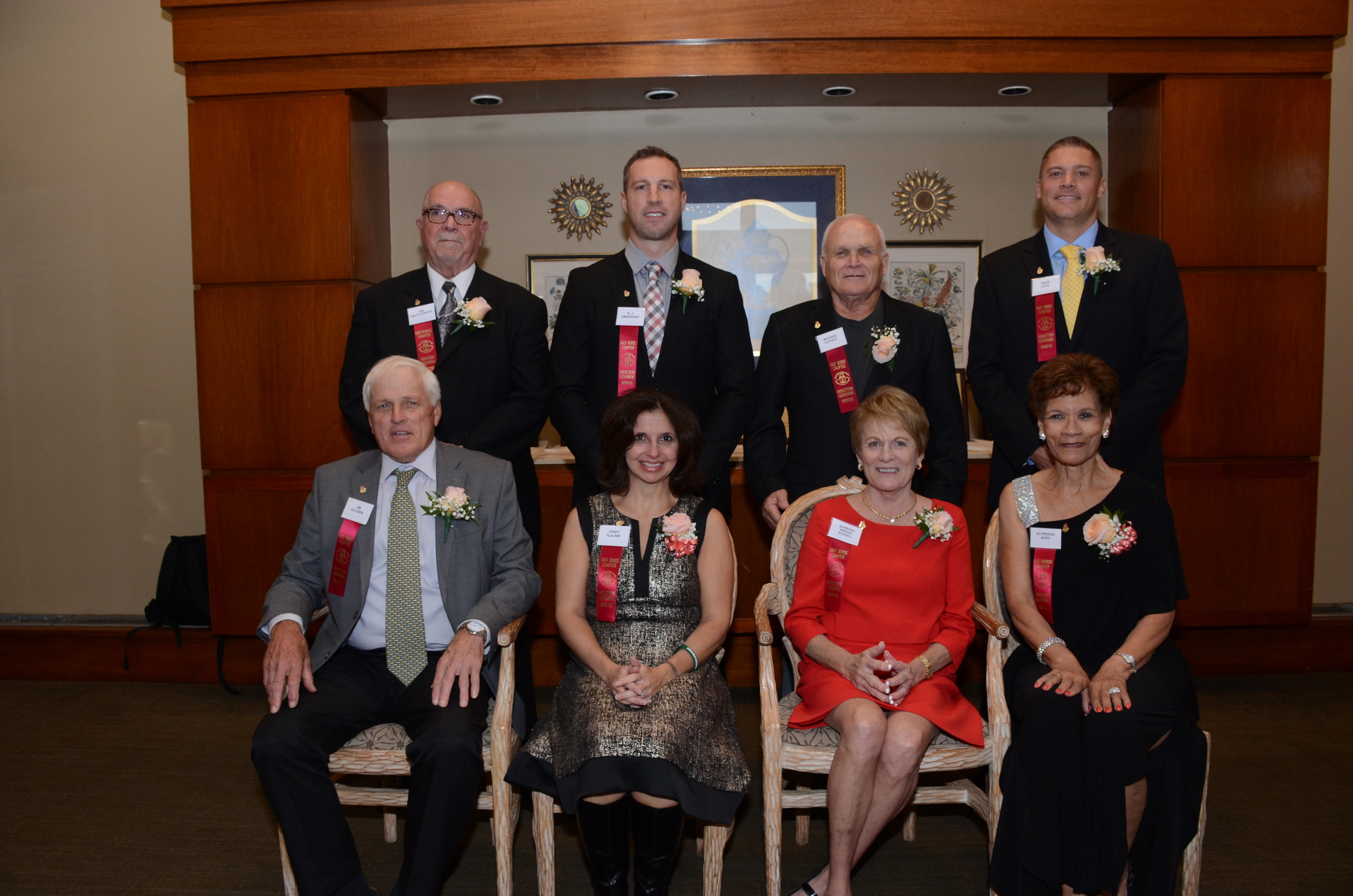 Jim Alcorn began his sports career at Penn Hills High School lettering in football and basketball and graduating in 1963.

His two-year career stats saw completion of 274 of 480 passes (57.1 %) for 3,878 yards and 41 touchdowns. Clarion had a two-year record of 18-2. Honors over that period included: Curbstone Coaches Player of the Year in 1966, MVP both years, Little All-American, All-Conference, and All-East, among many others. He also earned two basketball letters and once scored 44 points in a single game (Feb. 10, 1968 vs. California Pa.).

After graduating in 1968 with a B.S. degree in social studies, he was drafted by the Cleveland Browns in the 11th round, and played for the Ohio Valley Ironmen (1968-70). He then became a social studies teacher in the Penn Hills School District.

Mick is the 3rd of 7 children to Colette and Mike Catello.   He grew up in Penn Hills.  Age 12, he received the MVP trophy in Little League from his sport`s hero, Pirate Frank Thomas.  Mick was named to the Allegheny Valley American Legion All Star Team. Later, he was named to the Federation League All Star Team.

Giving back, Mick coached youth baseball and basketball in Penn Hills.  He is grateful to his coaches, teammates, family and friends who have been a very important part of his life.  Mick is honored to be named to the PA Sports Hall of Fame, East Boros’ Chapter.

Joe is a graduate of Swissvale High School and a 3 Sport Letterman, after which he received a football scholarship to North Carolina State University.

Swissvale High School Athlete of the Year finalist in 1960

Member of SHS noted "Go Team" for the School's Section 7

Joe's career covered 20 years of coaching football, wrestling, track and volleyball before retiring from coaching in 1985, and from teaching in 200l.  His career included coaching 4 years track and field and 3 years coaching football at Plum Jr. High.  He then transferred to O’Block Jr. High where he coached football for 4 years and wrestling for 15 years.

Joe began the wrestling program at O’Block in 1971 and his statistics are noteworthy:

Coach Dello tried to achieve a solid foundation and a winning attitude in every sport he coached that would help the success of these programs at the Plum High School level. In 2014, he was inducted into the Plum HOF.

Bob graduated from Plum High School in 1985 and was Class President for 3 years.  He was a member of the 1983 Quad-A Championship Football Team and Captain of the 1984 Team.  Bob won the 1985 Outstanding Senior Award and had leading roles in the musicals Guys and Dolls and Can-Can.

Bob went to Penn State and received his B.A. in Communications in 1989 and became a Continental Airlines Flight Attendant in 1992.  After traveling both internationally and domestically, he retired in 2015 to pursue a second career in the sports industry.

Bob served as Expedition Officer for the Continental Adventure Series where in 1999, he climbed Mont Blanc in the French Alps to the summit of 15,840 feet.  In 1997, he hiked 100 miles in 12 days through France, Switzerland and Italy.

From 1996 through 2015, Bob completed over 150 road races, triathlons and multi-sport events.  In his 20-year racing career, he won 101 overall/masters/age group awards.  In 2014 Bob ran the Boston Marathon with a personal best record of 2:46:13, an almost even 6:20 pace throughout the entire race.  The Boston and Pittsburgh Marathons were the races he loved the most!

Bob completed at least 20 triathlons covering various distances, including his first and best triathlon in 2001 in Panama City with a time of 10 hours and 40 minutes. Bob was an RRCA Certified Coach and many of his clients went on to reach their racing goals.

A 1961 Wilmerding graduate, Alfreeda was introduced to sports by her father, not knowing her passion for competition would lead to a 50 year career as a teacher, coach and athletics administrator.

During her time at Slippery Rock State College she started the development of her coaching and leadership skills and philosophy.

At East Allegheny, as a teacher it opened the door for coaching at a competitive level where there was great interest from the girls at EA.   Alfreeda was the first head coach for Cross Country/Track & Field and Swimming.  The Track program was successful and during her final year as the head coach, the team went 16-0 in dual meets; Carmen Curry was the WPIAL champion in the 200; Carmen and Johnette Howard qualified for the PIAA Track Championship and finished 4th and 6th respectively.

In 1975 she joined the Pitt Track program as an assistant coach and was promoted to head coach in 1976.  For two years, she was in charge of a high school and college program in the sport of Track & Field.  While at Pitt she had several athletes named All-Americans.

She left coaching and moved into administration in 1982, where she received numerous awards for her work regionally and nationally.

Through her career Alfreeda gave back to the sports community working events such as Women & Men’s Final Fours, Track Nationals, Field Hockey Nationals and the Super Bowl.

Alfreeda retired in 2015 and now serves as an athletic consultant.

After high school Dave attended Duquesne University as a 4 year starter at quarterback and 2 time captain.  During that time he broke 13 of 15 passing records and appeared in 2 ECAC bowl games.  MVP of the 1995 ECAC bowl, throwing for 333 yards and 4 touchdowns, beating Wagner 44-20.  30-7 as a starter under Greg Gattuso, at Duquesne, and a 2 time MAAC Champion.  Upon graduation from Duquesne he spent a short period of time in the Washington Redskins camp.

Once his playing career ended he began coaching high school football at East Allegheny for 11 years and coached 1 year at Baldwin high school.   In between high school coaching, he spent 2 years as quarterback coach, under Greg Gattuso, winning 2 MAAC championship and the ECAC bowl against Monmouth to become the Mid Major Level Nation Champion.  Six years under Jerry Schmitt as wide receivers coach, winning the MAAC championship then moved to the NEC conference and winning the championship in 2011.

RJ attended Plum HS where he began focusing on Ice hockey.  As a sophomore, Umberger led the Mustangs to a W.P.I.H.L.  AAA Championship scoring 116 points in 26 games while leading all of Western PA High School Hockey in scoring.   The Mustangs retired his jersey in 2006 and he was elected into the Plum HS Sports Hall of Fame in 2012.

RJ played his junior and senior years for the US National Under 17 & 18 teams comprised of the best twenty kids of their age in the USA.  Competing both nationally and internationally, Umberger led his team in scoring and still ranks among the top 10 in program history.

He received a full athletic scholarship to The Ohio State University.  While playing three season of Division I hockey, RJ amassed 129 points in 112 games.  His accolades include 2001 CCHA Freshman of the Year, 2003 CCHA 1st Team All-Star, West 2nd-Team All-American, and Hobey Baker Finalist for college hockey player of the year.

Professionally, Umberger is the first and highest PA born drafted in the 1st Round of the NHL Draft (16th overall 2001 Draft). RJ played 11 seasons in the NHL, five with the Philadelphia Flyers and six with the Columbus Blue Jackets.  He impressively had five 20 plus goal seasons on his way to 180 goals, 212 assists, in 779 career games.

Barbara Wright Russell, daughter of the late Richard and Violet Wright, was born and raised in

She began playing and learning the game in the early 1970’s.  Her passion for golf was nurtured by her father who offered important golf words of wisdom.  “Always keep your head down and hit it straight down the middle!”  A total of 36 golf championship later, she obviously listened to her father.  Barb has 20 championships at Edgewood Country Club, 10 at Oakmont Country Club, 3 Women’s Golf Association of Western Pennsylvania (Team Match Play), 1 WGAWP (Individual Champion-President’s Trophy Winner), and 2 National Ladies Club Championships (First Flight Winner). But, perhaps her finest hour on a golf course was competing against World Golf Hall of Famer, Carol Semple Thompson in head to head match play format and playing to a tie.