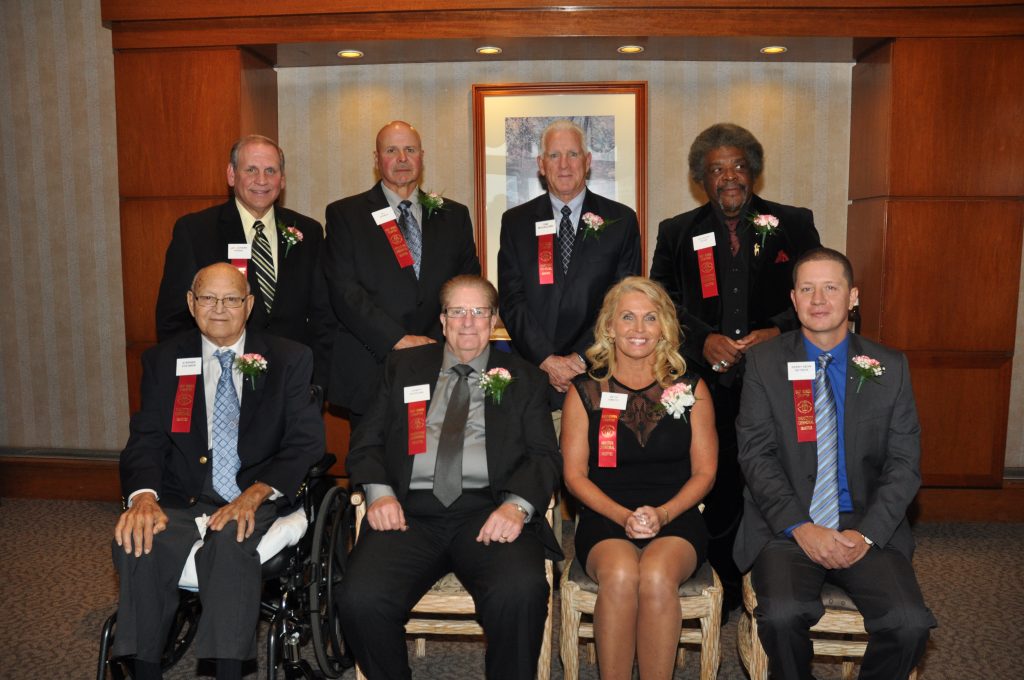 Beth attended Gateway High School and as a freshman qualified for states in cross country. The next year she broke the school’s two-mile run record and earned Gateway’s Most Valuable Runner Award. She was a four-year letter earner in cross country.

Amato went on to win an American Gladiator Tour competition in Pittsburgh in 1992. Out of 10,000 contestants she was one of 32 women chosen from across the U.S. To compete on the American Gladiators television show. Beth also qualified to run in the Boston Marathon.

In 2002 her 12 year football career began. As one of the original members of the Pittsburgh Passion she played linebacker and was captain for 10 out of 12 seasons. In 2005 Amato was presented with the National Women’s Football Association All-Star Award for outstanding play.

In 2006 she led the team with 72 tackles. She holds the record for most career tackles and is second on the all-time list for most tackles in one game with 17. Amato helped the Passion win their first national championship in 2007 in the IWFL with an undefeated season. At age 49 the 2014 season was her last with the Passion. Pittsburgh won the IWFL title finishing off another perfect season. Amato scored three defensive touchdowns in her career and is the only defensive player to score a touchdown in all three women’s leagues, the IWFL, NWFA and the Women’s Football Association. She is the oldest player in the history of the Passion to score a touchdown at age 46.

Kerry was born in the 3 rd Ward North Braddock where he began his athletic career. He graduated in 1986 from Turtle Creek High School lettering in baseball and football.

He became an Athletic Director in 1997 at CCAC South where he won the inaugural WPCC Athletic Director of the Year in 2006. He entered the high school ranks at Elizabeth Forward in 2006, serving on the WPIAL Soccer Steering Committee and as the President of the Big 7 Athletic Conference. In 2010, Kerry joined Penn-Trafford and was awarded the “Teaming With Pride Award” for his dedication to the Penn-Trafford Community. He then served on the WPIAL Baseball Committee and President of the QUAD A Conference.

Tom grew up in Turtle Creek and started playing organized sports at the age of nine. Little League baseball and Mighty Mite football helped build his love for all sports. He played quarterback for the Eagles who were undefeated all four years. He lettered in football, basketball and track at Turtle Creek High School and was a member of the 1967 WPIAL Class “B” champion basketball team.

In 1967, Tom received a football scholarship to the University of Nebraska where he set the Freshman Team season record for interceptions. Playing safety, Tom was a three time letterman and was on the back to back National Championship teams in 1970 and 1971. One of his top memories was playing in the “Game of the Century” against Oklahoma.

Tom started his coaching career at Lincoln High School as an assistant in football, wrestling and head golf coach. The “Links” golf team finished second in the 1974 Class “A” State Tournament. In 1974 Tom left Lincoln High and accepted the Head Football coaching job at York High in York, Nebraska. He led the “Dukes” to conference championships in 1974 and 1975 but lost in the first round of playoffs. Tom continued coaching year round as an assistant for girls basketball and track.

In 1978 he left teaching, but continued coaching youth league sports in Denver, CO and South Bend, IN.

During his high school career at Trafford, Jackson lettered in basketball and football, receiving honors in football; All WPIAL, ALL State, All American and leading scorer in the Pennsylvania Big “33”. Jackson gives 110% on the field and in life, as legendary Vince Lombardi who spoke to him and said, “Second Effort, give when you can’t give.”

Upon graduation, Jackson accepted a football scholarship as a running back and field goal kicker at Eastern Michigan University, where he won honors as “most valuable player”, established the record for the longest field goal in game history, and scored the only points for (EMU) in the Pioneer Bowl against Louisiana Tech University.

After college, his friend, Charlie Scales (formerly of the Steelers and running back with  Jim Brown of the Cleveland Browns), introduced him to John Henry Johnson (Pro Football Hall of Fame) who signed him to play for the Chicago Fires (the newly founded pro team- World Football League). Although the league didn’t last long or his time with them, he had another opportunity when Mr. Rooney and running back coach, Dick Hoak, provided him a chance to become part of the Steelers’ practice squad. However, injuries took their toll and Jackson began working in Social Services with individuals with brain injuries and mental illness.

After spending time with PBS TV, Promotions/Marketing and State Crew Theatrical Acts, Jackson’s interest shifted to the theatrical field of ‘acting’; appearing in 30 movies, 12 TV Series, 13 commercials, 3 videos and 2 print ads. He volunteers for the Pittsburgh Film Office and Lupus Foundation of Pennsylvania.

Rich began his athletic career at South Junior HS. He thanks Coach Bob Holden for his encouragement, guidance, wisdom and faith in his athletic ability. At South under Coaches Holden and Giles, the 9 th grade team went 17-0 and won the WPIAL Valley League Championship. Rich also played 2 years of football under Steve Statnick.

At Gateway HS, Rich played basketball and baseball. He was a starter at point guard for three years and played under Coaches Laughlin and Murphy. Scoring near 1000 points for three years included a personal best of 36 points vs. McKeesport. As a senior under Art Betts, Gateway played at the Civic Arena in the quarter finals. Rich started at point guard for the PA ALL-STARS in the elite DAPPER DAN ROUNDBALL CLASSIC. He was a pitcher and center fielder for Gateway baseball. In 2005, Rich was inducted into the GATEWAY SPORTS HALL OF FAME.

From 1970-74, Rich played basketball at the University of Maryland under Coach Lefty Driesell. He was the point guard for the freshman team which was 16-0 and ranked #1 in the nation along with UCLA. In 1972 the Terps won the NIT Tournament in Madison Square Garden.

Sandy Spokane at the age of nine began playing Little League then Pony League baseball and became immediately hooked. He went on to letter for Taylor Allderdice’s varsity baseball team, and attended Youngstown College, where he also played baseball.

While continuing to progress in baseball, a sports writer from The Post-Gazette encouraged Sandy to try out for Major League Baseball. He had his tryout with the Milwaukee Braves, where he met players such as Hank Aaron, Eddie Mathews, and Bob Uecker. Uecker caught for Sandy and began without catcher’s equipment. After a few of Sandy’s signature knuckle balls, Uecker called a timeout and respectfully put on his equipment. Sandy continued to have one of his best days pitching, fielding, and hitting. Even though players from the Braves were optimistic about signing Sandy, he never signed a contract.

He expanded his athletic portfolio by playing softball, officiating, and coaching. He officiated baseball, softball, football, and basketball for the PIAA. His coaching career began with Little League and Pony League baseball. Later he coached the girls fast-pitch softball team at Gateway High School for 15 years.

After a successful football career at Slippery Rock College, Steve proudly served for two years in the Army, 1953-1955, and returned to Johnstown where he started his storied career at two local high schools.

In 1963, Steve accepted the position as head of the physical education department at a newly built complex named South Junior High, part of the Gateway School District. This was the start of the Coach Statnick tradition and legacy. The iconic maroon, white, blue and gold trunks gym uniform and program was created, representing Steve’s principles of life-time fitness and hard work to build confident students and leaders in our nation.

Steve’s incredible coaching record of 69-15- 1 at South included seven undefeated season, 40 shutouts and from 1965 to 1973, a record of 43-2. During these impressive years, Steve also earned a Master Degree from Penn State and in 1979, he joined the Gateway coaching staff.

Eli began his career in football at Franklin Regional (FR) playing for four years, lettering for three. He received a scholarship to Sterling College, Kansas as a Defensive Lineman. He was a starter, Most Valuable Lineman and First Team All-Conference four years in a row, and named NAIA District 10 Scholar Athlete twice.

After graduation from Sterling, he continued on as an assistant coach for one season. In 1972, Eli was hired as a teacher and assistant football coach at Wilkinsburg High School. In 1973, he began his teaching and coaching career at FR. In 1976, he became the head football coach and remained for 14 years. His 1984 team was the first in school history to make the playoffs by defeating Steel Valley 7-6. In 1981, Eliwas named independent Coach of the Year by the Pittsburgh Post-Gazette. He was the head track coach at FR for 18 years where his teams won three conference championships.

In 1991-92, Eli’s career continued as Offensive Line Coach at Duquesne University. His 17 year tenure at Penn-Trafford began in 1993, where as Offensive Coordinator from 1996-2009, he assisted in producing 14 straight years of playoff teams, with the 1997 Warriors appearing in the WPIAL Quad A Championship. In 2010, he moved to Norwin High School where he began his fifth season as Offensive Coordinator.