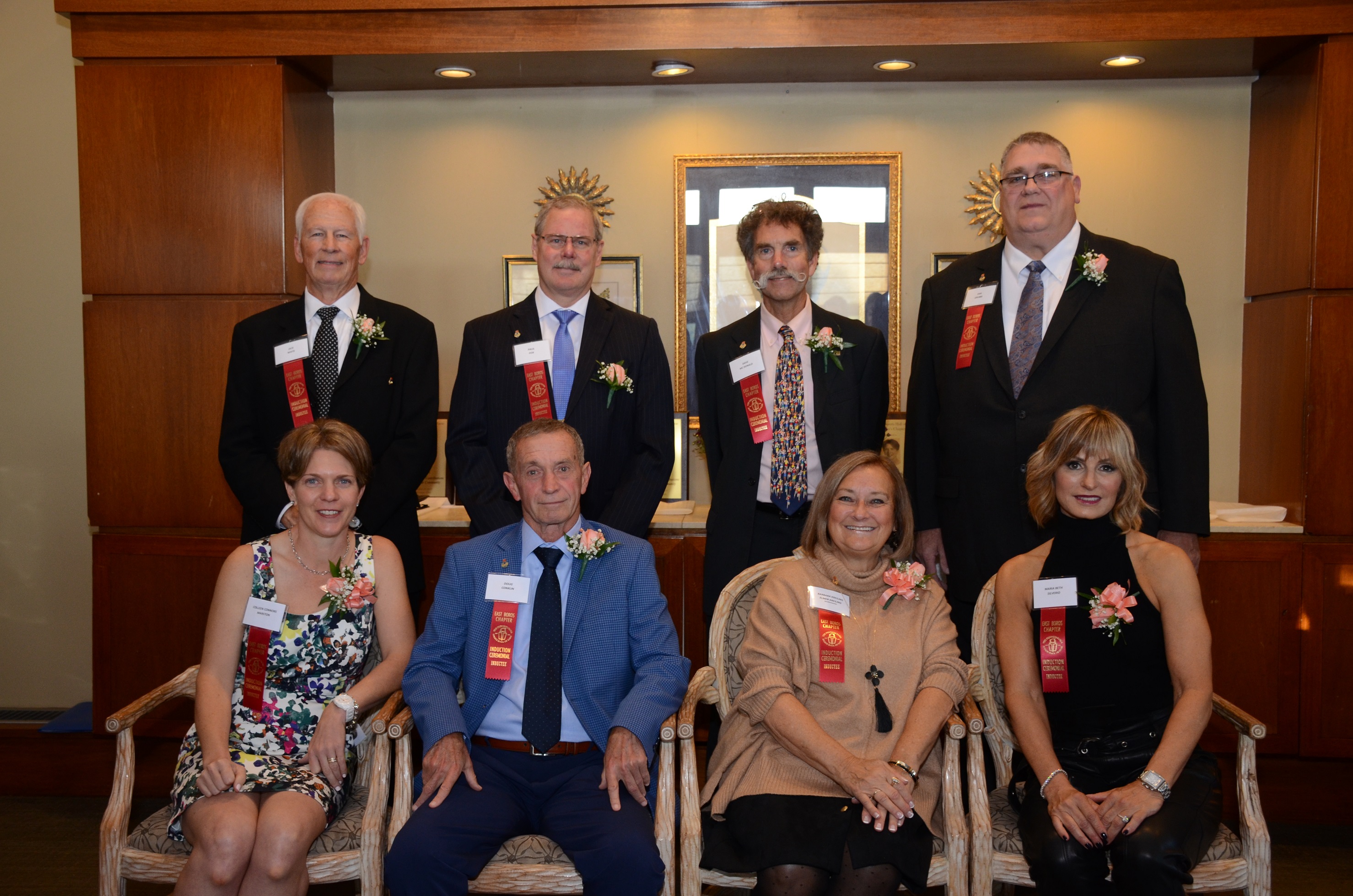 Doug was born and raised in Turtle Creek, Pa. He graduated from TCHS in 1968. He attended McCook Junior College and then transferred to Mount Marty College in Yankton, South Dakota where he graduated in December of 1972 with a double major in History and Health and PE.

Doug started playing basketball in Junior High and continued playing in high school. He was a two year letterman. He was a member of one of the best teams in TCHS history, the 1967 W.P.I.A.L champions. His senior year, he was selected as a Co-captain. The team repeated as Section 13-B champions. He was selected first team all-section. Doug also was a two year letterman in baseball.

His teaching and coaching career began in 1974, at Franklin County High School in Rocky Mount, Virginia. He taught History, Driver’s Education and Health and PE. His coaching resume included basketball, football and golf. He coached basketball for 38 years. The last 14 years were spent as the Varsity Head Coach. He was a volunteer coach for recreation and travel basketball in the summer. Doug has been a lead fund raiser for all sports, even in his retirement.

Doug was chosen Timesland Coach of the year, in 2006. He is the winningest coach in school history with a 195-125 record. His teams won 3 district championships and two state quarter final contenders. During his tenure at Franklin County High School, varsity basketball had two 21 win seasons which remain the best season records in school history.

Paul Fox graduated from Plum High School in 1982 as a 4 sport letterman in swimming. At Plum, he broke one of the oldest standing high school swimming records, the 100 backstroke.

In high school, he was a member of the record setting 200 Medley and 400 Freestyle relays.  Paul qualified for the W.P.I.A.L. all four years and the P.I.A.A. swimming & diving championships his senior year where he set another school record in the 200 Medley relay. Paul was instrumental in helping Plum win their Section Title all four years and was voted most valuable swimmer. He was their Team Captain his senior year. He also received YMCA National Honors in the 200 Medley Relay.

Paul attended Clarion University where he continued his swimming career. He was a Pennsylvania State Athletic Conference (PSAC) qualifier all four years and instrumental in continuing Clarion’s 19 straight PSAC conference championship titles. He earned PSAC conference champion seven times. In his sophomore year he broke one of the oldest standing PSAC records in the 100 backstroke earning him a spot at the 1984 NCAA Division II National Swimming Championships. He continued making NCAA National qualifying times eventually earning 3-Time All American Status and a two time school and pool record holder.

Swimming is a lifelong sport for Paul and he continues to swim with the Hampton Dolphins Masters. He is a recognized certified USMS Masters Swim Coach and a member of the Allegheny Mountain Swimming Association.

Dan is a 1976 graduate of Turtle Creek Area High School; his basketball career began at St. Colman’s where his 8th grade team won the Diocese of Pittsburgh Championship.

He played high school ninth grade and was a starter his sophomore, junior and senior years. He scored a total of 1,048 points and over 1,000 rebounds. Junior year named Section 16B All Section Team they won the Section 16B Section Title. Senior year, they were Section 15AA champs and runner up in the WPIAL Championship game, placing 3rd in the PIAA with a 28-2 record. He was named 15AA MVP All Section Team; and named to the WPIAL and PIAA Class AA All Star Team.

Attending Ferrum Jr. College in Virginia, he was a two year starter. Freshman year, ranked 11th in the nation and was named MVP with a record of 25-5. Best Defensive player in 1976 Electric City tournament at Anderson Junior College. Sophomore year record of 17-8 - named to All-Tournament team Cleveland College in Tennessee.

Dan attended Radford University as one of their first scholarship players. Junior and senior year voted MVP and completed his career with 1,322 points and 1,021 rebounds. In 2001, Dan was named to the Radford University Hall of Fame. He thanks his coaches and teammates over the years for their support.

Elmer has been described by a fellow teammate as “the coach on the court.” “He led the team in a quiet way; being strong, agile, and smart.” Another friend said, “His best trait was controlling the offense, passing the ball to a teammate with the better shot than his own.” His greatest attribute was making everyone else a better player; and knowledge of the game was second to none.

Elmer attended Clarion State College receiving a BS in elementary education. A three year starter, he was recognized as the best assist man in Western Pennsylvania, tied for 6th on the all time Clarion list with a season total of 160 assists. During the 72-73 season, he made a total of 129 assists, ending up sixth with 6.1 assists per game. He holds a single game record of 16 assists and a career total of 284. Elmer participated in two consecutive Western Conference Championships – Pennsylvania Athletic Conference, 1970-1971, and two consecutive NAIA District 18 appearances, 1970-1972, tying a college record for most wins in one season.

Elmer has always shared the limelight; a core trait had been installed in him by his father, Elmer (Pickles) Kreiling, Sr., a basketball player himself at Duquesne University.

Colleen Connors Marston, daughter of Jean and Dan Connors, is the second of five children. She was raised in Monroeville and attended St. Bernadette Grade School and Gateway High School.

At Gateway, she started in every varsity game in both soccer and basketball from 1989 to 1993. Colleen helped the Girls’ Soccer Team to the first undefeated section championship in school history, was the team’s leading scorer, and a Section IV All-Star. However, it was basketball that became her passion. She led the Gators in scoring each of her four years and graduated as Gateway’s all-time leading scorer with 1,227 points. During her senior year, Colleen was selected to the Pittsburgh Post-Gazette’s Fab Five, earned WPIAL All-Section honors, and was named Co-Player of the Year by Gateway Press.

Colleen received a full Division I scholarship to St. Francis University of PA. Her team is inducted into the St. Francis Hall of Fame for becoming the first team in school history to win the Northeast Conference and participate in the NCAA Women’s Basketball Tournament.
For the past 22 years, Colleen has taught math at Gateway High School.

She is grateful to her coaches, teammates, friends, and most importantly her family who have helped contribute to the athlete that she was and the person she has become.

Dave’s running career began in 1971. By the time he reached his senior year at Churchill High School, he had established himself as one of the top scholastic runners in the country (4:14 mile & 9:14 two-mile [WPIAL Champion]).

After college, Dave coached track and cross-country at Duquesne and Old Dominion Universities and also served as the coordinator for the Jesse Owens and Hershey Track Programs in Pittsburgh. He continues to work with the Tidewater Striders youth running program in Norfolk, Virginia.

Highlights of Dave's running career include: qualifier for three U.S. Olympic Marathon Trials; 1988 & 1989 Virginia Ekiden team member; 12th place finish in the 1984 Boston Marathon (2:17.51); victories at the Shamrock, Charlotte Observer, and Glass City Marathons; 4th place finishes in the Grandma’s and Manila Marathons; dozens of local, regional, and international 1st place triumphs including the American Airlines/Xerox Caribbean Grand Prix Championship, the Pittsburgh Great Race, and the Elizabeth River 10K (3 times). In 2001, Dave was inducted in the inaugural class of the Tidewater Striders’ Hall of Fame. In May 2020 Dave will be inducted into the Pittsburgh Marathon Hall of Fame.

Starting her basketball career in 1975, she scored over 400 points in 8th/9th grade, leading her team to 2 Quad-A Section Championships. Desire, hustle and quickness describe this varsity player and team captain; one of the best defensive TC players. She started at point guard junior/senior years scoring 512 points. She contributed greatly to TC winning 2 Section titles, 3 consecutive WPIAL play-off games, a state play-off and WPIAL Championship. One of the top 10 highest scorers in TCHS history; played in 1980 Colt Classic All Star Game; and included in WPIAL Terrific 20 First Team.

Since college, she competed in bodybuilding competitions winning many in her weight class. Played National Deck Hockey; took 1st place in the Warrior Dash and Spartan Obstacle Race.

Working as a professional personal trainer since 1985, she accomplished a personal dream opening fitness studio (2001).

Jack graduated from Wilkinsburg High School in 1962. Having participated in organized football since age 8, he was an All-WPIAL quarterback and was All-WPIAL in wrestling in the 180 lb. class. In his first game as a starter, he threw 4 touchdown passes.

After receiving many offers to play college football, he first decided on the University of Florida, but soon transferred to Penn State in 1963.

Jack started as quarterback his junior year and set 3 passing records for completion and yardage. In his senior year he scored the first touchdown against Maryland in Joe Paterno’s first year as head coach. In his junior year, he was drafted in the 8th round by Don Shula and the Baltimore Colts.

Jack decided to forego a professional football career in favor of graduate school and attended Pitt Dental School from 1967 to 1971. He then served as a Navy dentist with the First Marine Division from 1971 to 1973 and practiced dentistry for 42 years in San Diego until 2015.