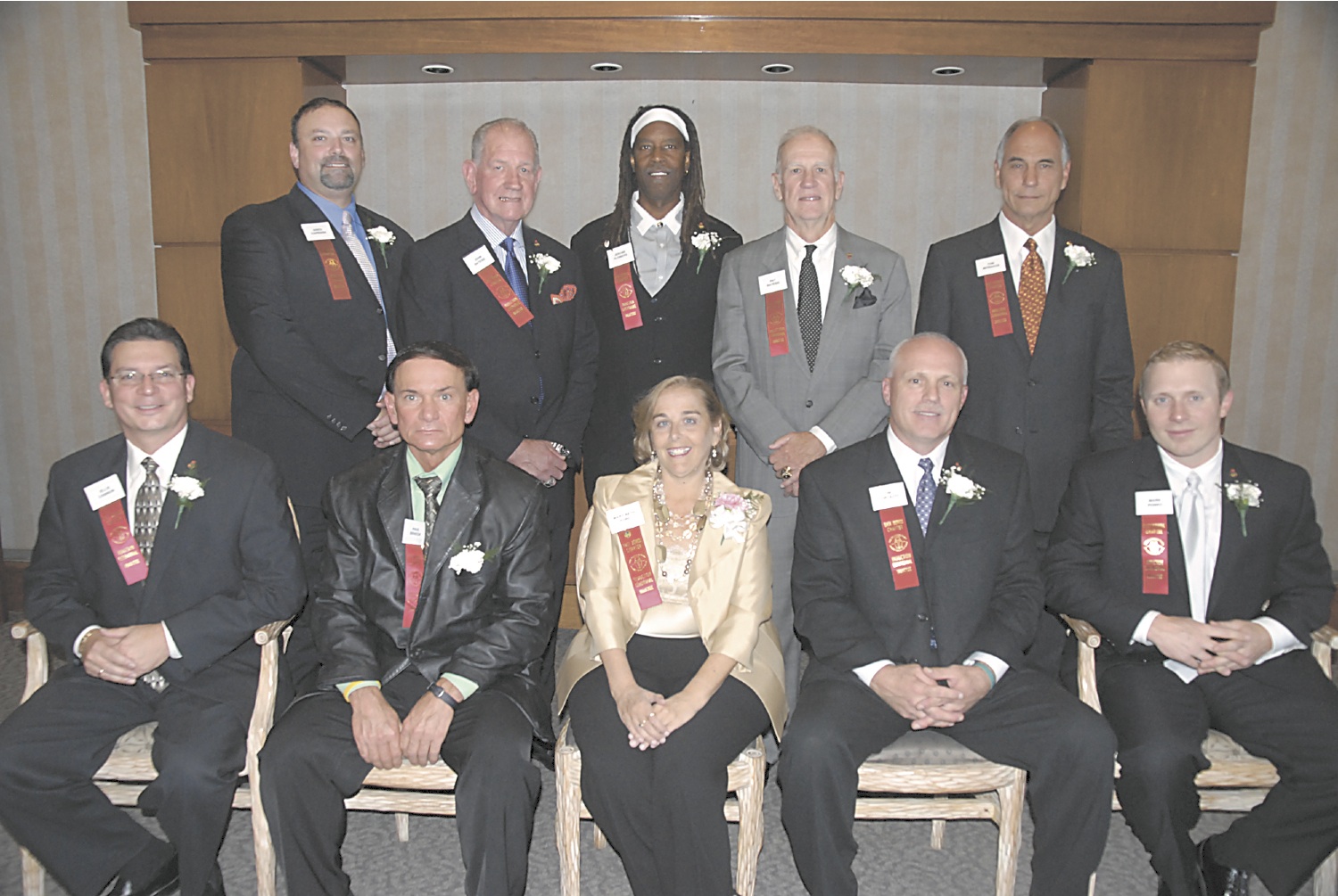 Ellis Cannon has had successful careers in sports broadcasting and publishing to become one of the region’s most respected, knowledgeable and entertaining sports personalities.

Following a career as a trial lawyer, Ellis co-founded the Pittsburgh Sports Report in 1996 with his brother, Henry. PSR is the most successful sports publication in Pittsburgh history, winning five Golden Quill Awards. Ellis is also the publisher of KidSPORTS Magazine, A Parent’s Guide For The Young Athlete.

Ellis was an on-air member of the Pittsburgh Steelers Football Network during the 2004-2009 seasons, serving as host of the Steelers’ network game day coverage, as well as offering in-game updates and analysis. He has appeared extensively on local and national television, including Fox News Channel, CNN, Court TV and KDKA-TV.

Ellis was inducted into the Beaver County Sports Hall of Fame (Broadcasting) in April, 2010.

Gregory is a Graduate of Turtle Creek High School. Greg’s athletic career over the past 33 years has been a blend of competitive performance and leadership. Greg played football and earned a scholarship to Indiana University of Pennsylvania. He also organized a small group of Turtle Creek students to compete for the Churchill High School Track and Field team during the first year of the newly formed Woodland Hills School District.

Greg’s football career ended when he was injured in his freshman year. He returned to the field for the Indians as a Track & Field athlete qualifying for the PSAC Championships in the discus in 1987 and holding the school record in the Hammer Throw for three years.

In 1987 Greg was afforded the opportunity to work as a strength coach for the Florida State Seminoles. In 1990, he was hired in the same capacity at Syracuse University. He was named the first strength coach in the history of Colgate University in 1994. During this time, Greg participated in several bowl games including three Fiesta Bowls, 1989 Sugar Bowl, 1990 Aloha Bowl and 1992 Hall of Fame Bowl. Greg has also personally coached 7 NBA First Round Draft Picks, 44 Collegiate All Americans, and 2 Olympic Gold Medal winners.

During his professional career, Greg has been published five times in national journals. He has served as a clinic speaker and has taught coaching education classes at West Virginia University.

Tim is a 1977 Graduate of East Allegheny High School where he was a 3 sport athlete. He attended West Liberty State College

earning his degree in Health/Physical Education. In 1991 Tim received his Masters Degree in Elementary Education from California University of Pa.

Tim has 28 years of coaching experience. As an assistant at East Allegheny and Penn Trafford he was involved in 10 WPIAL playoff seasons, a WPIAL AAAA runner-up, WPIAL AA Champion, Western Region Champion, and PIAA-AA runner-up.

Mary Beth joined the Board of Directors for the Pennsylvania Sports Hall of Fame (HOF) East Boros Chapter in 2003. She has been the Banquet Chair since joining and Co-Chairs the Scholar-Athlete Golf Outing. She is proud of the organization’s accomplishments; from sold-out banquets to successful golf outings, where 24 scholarships have been awarded to local students. Recently she completed a volunteerism survey and was surprised by the results…volunteering over 3,200 hours to the HOF.

She is a graduate of Plum High School and Slippery Rock University, where she majored in Communications and is a member of the Communications Advisory Board. She began her career at WTAE-TV as a Production Assistant for the morning talk show “Pittsburgh’s Talking” and an Associate Producer for special projects. A favorite moment was a commercial shoot with first year NBA player, Michael Jordan.

She spent the next decade as a Special Events Director for non-profit organizations: American Cancer Society, Cystic Fibrosis Foundation, and Juvenile Diabetes Foundation. She led hundreds of volunteers in raising over $4 million through golf tournaments, walk-a-thons and galas.

Jerome has been involved in sports since age 7 at the Rankin Christian Center and Rankin Little League (Pony League). He lettered 4 years in football and basketball at Rankin High School and was a “Class B (Small School) All American” in basketball in 1968. He played in the Dapper Dan Roundball Classic (1968) and was named to the Pittsburgh’s “All Big Five Team.”

Jerome accepted a 4-year basketball scholarship to the University of Maryland (lettered and played for 3 years).

Following college, he continued working with youth and directed recreation centers in Maryland and coached high school basketball in Pittsburgh. In 1984, he became a Jazzercise instructor teaching children and adults the importance of fitness.

While he never left his roots, Jerome continues passing on lessons he learned at Camp Greenwood (R.C.C.) informing all that their life is a gift and that sharing their gift is the essence of life.

Tom is a 1964 graduate of Penn Hills High School where he was named to the All-WPIAL, All-State, Big 33, and All-American Honorable Mention teams. He lettered three years at the University of Pittsburgh where he graduated with a concentration in Political Science.

Tom was co-captain his senior year, named to Notre Dame’s National Championship All-Opponent team, and was drafted by the San Francisco 49ers. He was selected to the All-Star team at center for the Continental Football League.

He is a member of the Penn Hills Sports Hall of Fame, a Letterman of Distinction at the University of Pittsburgh, and a past president of the Pitt Varsity Letter Club. He designed and helped create the panther statue that is awarded each year to Pitt Lettermen of Distinction, and it is replicated outside Heinz Field and the Petersen Event center at Pitt.

Mark was one of the most highly regarded defensive backs in the WPIAL. Was a standout two-sport athlete at Franklin Regional in Football and Basketball. Earned third-team All State honors in football.. Named to the Pittsburgh Post Gazette “Fabulous 22” and Pittsburgh Tribune Review All-Star Squad.

Mark joined the Pittsburgh Panthers Football Team as a walk-on in 1997…he was awarded the Prep Player of the Year Award in ‘97…following a redshirt year, worked diligently to make an impact on special teams and was named the units’ Most Valuable Player in ’98. In the spring of ’99 he was named the Ed Conway award winner (the most improved defensive player). He was put on scholarship the following season and responded by seizing the starting safety job and finished second in tackles.

He was 25 th on the Career Tackles list at Pitt upon graduation. He also received The Pittsburgh Iron Man Award and The Demale Stanley Award…is a four time member of the Big East All Academic Football Team.

John was blessed to have played football for some outstanding football coaches during his playing career. His football career started with Coaches Duke Weigle and Ding Schaeffer at McKeesport High; continued with Coach Thad “Pie” Vann at the University of Southern Mississippi and concluded with then Captain Don Hollander for the 7 th Infantry Division football team of the U. S. Army in Korea. Coach Vann is in the College Football Hall of Fame and Don Hollander was an All American end in 1954 at West point and became a war hero during the Vietnam War.

All of these men helped to prepare John for his coaching tenure at Plum Senior High School. He was fortunate to have coached All-State football players Dan Zelahy, Steve Koragis and Bob Smart at P.H.S.

Patrick started his teaching/coaching career in 1968 at East Allegheny HS before moving on to Plum HS in 1971. He moved into administration in 1978, as Asst. Principal at Latrobe, then as Asst. Principle at McKeesport HS and finally, as the Principal of Penn Trafford HS, where he retired after 10 years.

Captain vs. Boston College and Pitt, 1964; held career record for tackles by a Defensive Back

Member of the WPIAL Scholarship and Hall of Fame Committees

I am very honored and humbled by my selection to the Pennsylvania Sports Hall of Fame, East Boros’ Chapter. My whole life I have enjoyed participating in numerous sports. I grew up in a family that was interested in athletics. I developed a competitive spirit from my parents. It was nurtured on a daily basis. It became a way of life for me and my family.

We grew up in Penn Hills, an area that was rich in athletic tradition. While living in the area, I was exposed to many opportunities. I was very fortunate to be able to coach a number of sport teams, both boys and girls. My coaching career started very young (18) at St Bartholomew’s and continued on at Penn Hills, and later in North Allegheny School District totaling 35 years.

My goals as a coach were to push my players to be the best that they could be and develop a deep appreciation of team work  and the will to win. I modeled my coaching after many excellent coaches that I was exposed to. My aspirations were to teach my players life skills that would help them be successful both on and off the courtor field. Teaching and coaching is the greatest profession one could be in.