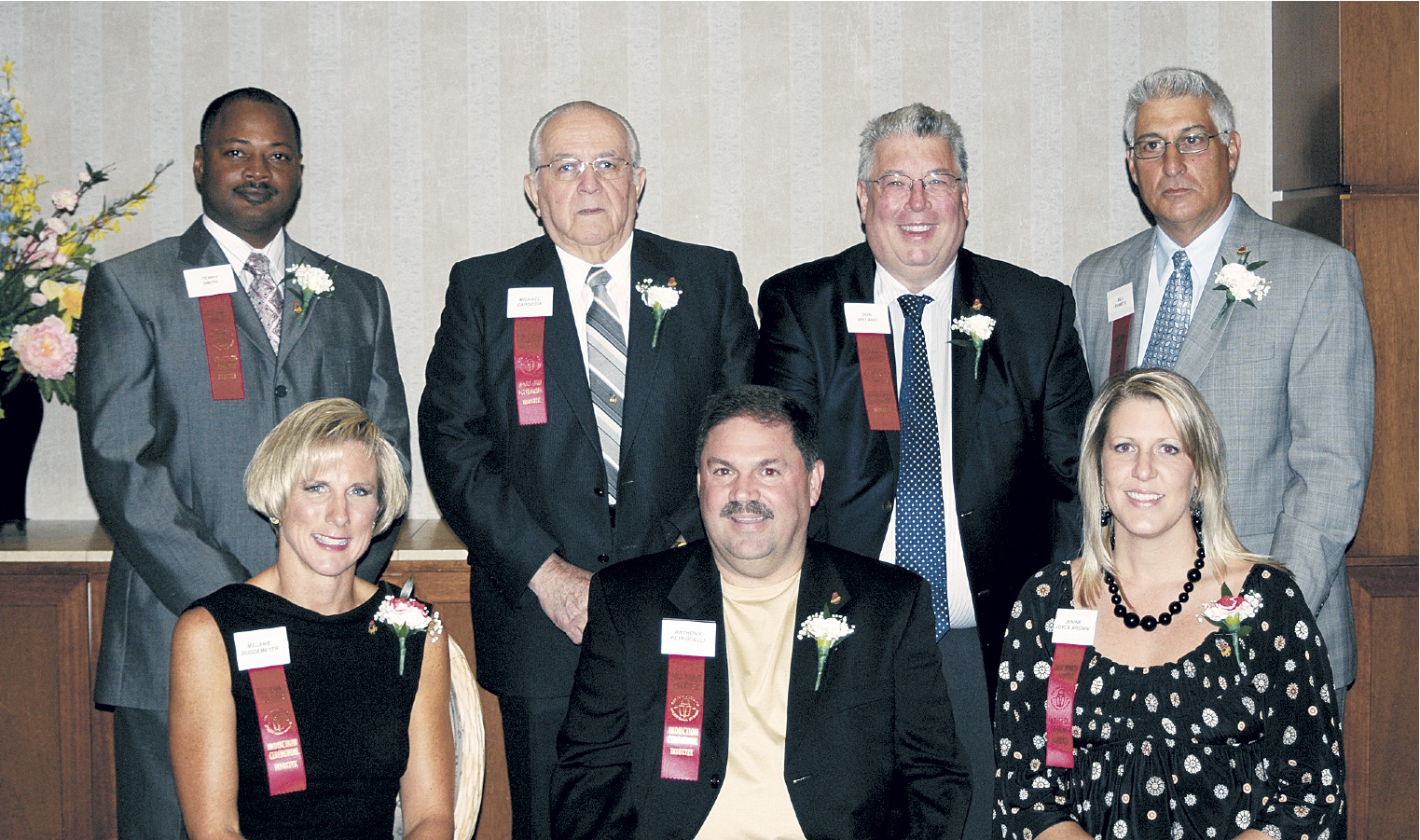 Melanie graduated from Penn Hills High School in 1984, where she was both Female Athlete of the Year and Valedictorian.  She attended the University of North Carolina, earning degrees in Biology and German.

*1985 North Carolina Athlete of the Year

Mike has been a life-long resident of East Pittsburgh and began his bowling career at the Terrace Recreation Center in East Pittsburgh as a pinboy. Mike is a WW II Navy veteran, a retired U.S. Postal worker and, for many years, worked part-time at The Terrace Lanes until the early 1980’s.

Mike was All-Events Champion at the Federal EmployeesTournament in 1966. In 1977, Mike was elected President of the Greater Pittsburgh BPA and inducted into their Hall-of- Fame. Since 1991, Mike has been Secretary/Treasurer of the GPBPA and works daily in their office in Turtle Creek. After serving in several offices, Mike was elected President of the Pennsylvania Bowling Association in 2004, was inducted into the Pennsylvania Bowling Hall-of- Fame in 1977.

Although Don “D.I.” Ireland never played a minute of organized sports; he became well-recognized as a sports announcer, writer and promoter three decades.

Starting at his native Turtle Creek Area High School, Don later announced at North Catholic and Penn Hills – including several WPIAL and PIAA championship squads - as well as doing some radio and cable TV work. In 1984, he became the P.A. announcer for the University of Pittsburgh’s women’s basketball program and later added women’s volleyball and men’s football, basketball and wrestling to his regular duties. He announced a few Big East championships in addition to WPIAL title games and numerous community and sports events over a 27-year span.

Don wrote news and sports stories for several local weekly newspapers. He won several writing awards as a reporter for the Gateway Newspaper chain in suburban Pittsburgh. Later, he became a regular contributor to The Pittsburgh Press, The Post-Gazette and Associated Press in the 1980s and 1990s.

Don organized and hosted a “High School Super Team” banquet for 12 years for the East Boros Chapter. He was on the Board for many years.

Jenine is a 1990 graduate of Penn Hills High School and a 1995 graduate of the University of Pittsburgh.  She was inducted into the Penn Hills Sports Hall of Fame on April 30, 2004.

Awards and accomplishments in high school:

Awards and accomplishments in college:

Penn Hills unmatched seven consecutive WPIAL Championships remains very special to Jenine.  She was a proud contributor and starter in championships # 2 through #5.  Her sister, Colleen, started on the #6 and #7 championship teams under the guidance of Bill Lind, who completed the run.

Born in 1956, Tony is not much older than Gateway itself.  Through the years, athletes with credentials second to none continued to graduate from Gateway - Tony felt Gateway’s special athletes and coaches needed to be honored.  He was proud of his alma mater and felt it was time - he decided to take action. When the school board first approved the new sports complex and Gateway was nearing its 40th anniversary fourteen years ago, Tony lobbied and the Gateway Sports Hall of Fame was born.

Tony participated in athletics at Gateway.  In 44 varsity baseball games, he played 2nd base and maintained a better than .333 career batting average.  From 9th to 12th grades, he was a part of football teams that combined a record of 34 Wins, 2 Losses, and 1 Tie; 2 WPIAL Section Titles; 1 WPIAL Championship; 1 PIAA Championship; 1 trip to Three Rivers Stadium; 2 trips to Pitt Stadium and 1 snowy trip to Johnstown versus Penn Hills in 1973.

Bill is a 1970 graduate of Plum Senior High School.  While there, he played football, basketball, track, and volleyball.  In his senior year, he was captain of the football and basketball teams – making All-Conference in football in his senior year.

He attended Slippery Rock University.  In his freshman year, an ankle injury ended his football career.  Bill received his degree in Health and Physical Education, where he still teaches in that capacity at Plum.

In 1975, Bill began his coaching career in Plum serving as an Assistant Football Coach and Head Girls’ Softball Coach.  In the spring of 1989, he was named Head Football Coach and he served in that position for twenty years.  In all, Bill has coached football at Plum for thirty-five years.

1989 Pittsburgh East Coach of the Year

1989 Gateway Publications Coach of the Year

2009 Founder and current President of the Plum Football Alumni Club

Terry played for Gateway where he was on 2 WPIAL championship teams.  He was selected to the Pennsylvania Big 33 and a 2001 Gateway Sports Hall of Fame Inductee.  Terry was a three-year basketball starter and Dapper Dan Round Ball select.