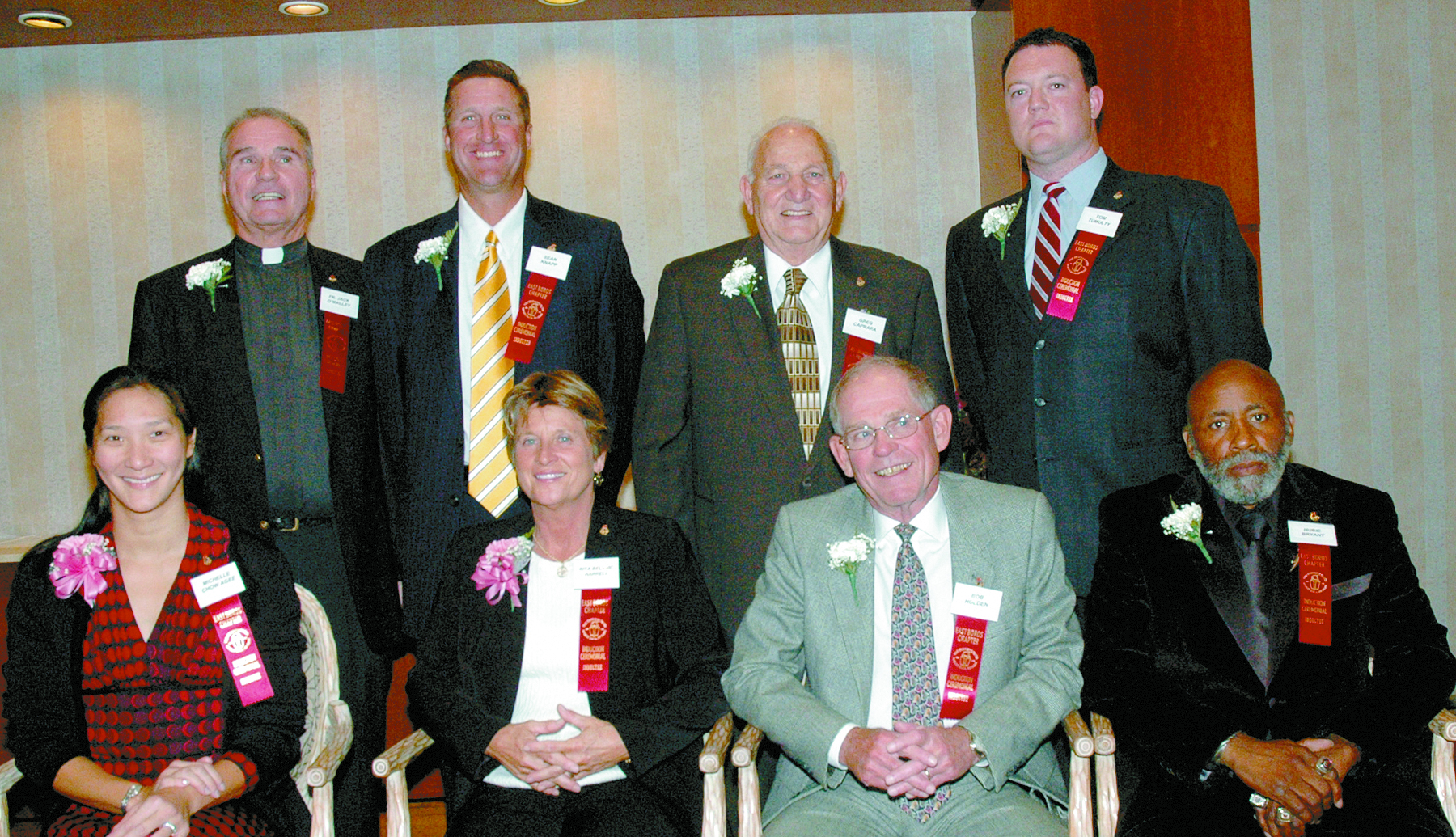 Michelle graduated from Gateway High School in 1986. She set the UNBREAKABLE record of A8 for 8" PIAA individual swimming titles in the 50 and 100 freestyles. No swimmer in the history of PIAA swimming has ever matched this accomplishment.

In 1986, she was voted co-female high school athlete of the year by the Pittsburgh Post-Gazette. Gateway established The Michelle Chow Award. Michelle accepted a full athletic scholarship to Texas A&M and was coached by Gateway legend Mel Nash.

At Texas A&M, Michelle competed at the NCAA Championships, earning Honorable Mention All-American status. Michelle finaled at the 1986 US Open, and competed in the 1988 Olympic Trials.

Now competing at the master’s level, Michelle won the 50 and 100 butterfly at the 2007 US Masters National Championships. Michelle is a 2-event former World Record Holder in the 50 free and 50 butterfly. She is a 15-time National Champion (winning at the national championship meet), and a 16-time All-American (having the fastest time of the year), and has over 90 top ten finishes (and still counting!).

Greg began playing sports as a child while attending Wilkins Junior High School.  By the time he attended Turtle Creek High School, he was lettering in varsity football, basketball, golf and soccer.  He also served as captain of the football and basketball teams, as well as serving as Class President his sophomore and junior years.  In 1953, Greg was named to the Dapper Dan High School All-Star Team and also played in the annual football game.

Upon graduating from turtle Creek, Greg was awarded a football scholarship to Michigan State University, where he majored in Education and played both as a lineman and a tackle.  After college, Greg was employed by Westinghouse Electric, where he worked for 33 years in both the East Pittsburgh and Pensacola, FL locations.  While living in Turtle Creek, Greg served as president and coach of the Turtle Creek Midget Football Organization for four years.

Rita Harrell began her career as the starting point guard of the Slippery Rock basketball team in 1971.   In her senior year, Rita helped to lead the team to an undefeated 11-0 season.  In 1974, she earned an invitation to play international basketball in Germany.   In 1975, Rita was invited to the Olympic trials for the premiering Women’s Basketball team.  She also enjoyed a successful career in softball as a member of four, world championship USSSA teams and was chosen to the All World Team in 1976.

After graduation, Rita began a successful career with the American Hardware Supply Company.  In 1984, she married James Harrell and together they operated their own hardware store in Greenville, South Carolina.

In 1993, the Harrell’s welcomed daughter Katie into the world.  Rita was a stay-at-home mom, becoming involved in Katie’s preschool at Mauldin United Methodist Church.  Shortly after, Rita began teaching Physical Education at the preschool.

Rita was the Director of Athletics, Health, Physical Education and Recreation at Shannon Forest Christian School (SFCS).  They won multiple Presidential Physical Fitness State Championships and was the first school in South Carolina to become a demonstration center for this successful program.

Rita has volunteered for many organizations including Habitat for Humanity, Missions to the World and programs at her Church.  Her quest for excellence, leadership and a Christ-like attitude on the court, in the classroom and in everyday life has touched the lives of many individuals throughout her long and successful career.

Bob graduated from Wilmerding High School in 1953.  He had been the starting third baseman for three years under the legendary coach, Lou Nemec; and in his senior year, he was captain of the basketball team.

From 1953-1957, Bob attended Washington and Jefferson College majoring in history and lettering in basketball.  The highlight (or lowlight) of his W&J athletic career was during his freshman year.  He was given the man-to-man defensive assignment to guard against West Virginia’s “Hot Rod” Hundley.  Hundley scored 50 points that night and moved on to become a WVU All-American and NBA star.

Following a two-year tour of duty as a Military intelligence Officer in the U. S. Army, Bob moved on to a teaching and coaching career in the Gateway School District.

At Pitcairn Junior High and then South Junior High in Monroeville, Bob taught World History and coached the ninth grade basketball team for fifteen years.  He then became Gateway High School’s coach for five years and had the opportunity to coach his son, Scott.

Over the years Bob has been invited to speak and teach at various basketball clinics and summer camps. In 2003 Bob was inducted into the Gateway Sports Hall of Fame.

Sean is a 1980 graduate of Plum High School earning varsity letters in basketball, football, and baseball.  In his senior year at Plum, he was voted Male Athlete of the Year.  He went on to Indiana University of Pennsylvania where he played basketball and golf. Some of his honors include:

9 time letterman, 3 each in basketball, football, and baseball;

- Top 100 History makers in the History of Western PA Golf

- Pennsylvania State Player of the Year 2004

- 11 Time U.S. Amateur Participant including a 1995 head to head match-up against Tiger Woods

Fr. Jack O’Malley is a Pittsburgh native born in 1936 in Pittsburgh’s Strip District, one of seven children, three sisters and three brothers.  He was a member of St. Patrick’s Parish until fourth grade he went on to continue grade school at St. Raphael’s Parish. He was an original member of the Morningside bulldogs football team in 1950-51.  He graduated from Central Catholic in 1954 where he participated in varsity basketball and football.  He went on to attend St. Francis Prep School earning Varsity Letters in Football, Basketball and Baseball.

He attended St. Francis College on a Basketball Scholarship and graduated in 1959 with a Bachelor of Arts Degree in Economics and Business.  While at St. Francis, he captained the basketball team that played in the National Invitational Tournament at Madison Square Garden in 1958.  His last two years, the team’s record was 40 wins and 10 losses.  Fr. Jack was the president of his class and the 1959 Mr. Frankie Award winner.  He was also a member of the student council and elected to the Who’s Who in American Colleges and Universities.

Signing with the Detroit Pistons as a free agent upon graduation, the course of his life seemed to be set.  Yet Fr. Jack had been thinking of becoming a priest.  Following a stay at a prep school in Boston, he became convinced that his true vocation lay in the priesthood and in 1965 he was ordained in Pittsburgh.

Tom Tumulty graduated from Penn Hills High School where he participated in football, wrestling and baseball.  His first love was baseball where he was named an All-State shortstop.  Excelling in football, he was named to the All-American teams of Parade and Super-Prep magazines, as well as USA Today. Tumulty then attended the University of Pittsburgh where he started at linebacker as a true freshman and was awarded College Big-East Rookie of the Year.  An emotional leader, Tumulty was named a Sophomore All-American in 1993 by Football News; three-time All-Big East; and was a two-time finalist for the Butkus Award. He graduated in 1995 as Pitt’s third all-time leading tackler with 404.

Tom was drafted by the Cincinnati Bengals in 1996 and quickly moved into a starting role as a rookie. Known as an exceptional run defender, Tom played all five of his professional years with the Bengals and was leading his team in tackles until his retirement in May 2000.  He was selected for the NFL Ed Block Courage Award in 2000 representing the Cincinnati Bengals.

Tumulty takes pride in giving back to his community working with many charities.  Among those he has hosted is the Tom Tumulty Youth Football Camp for underprivileged children; a founding ambassador for ARO (Athletes Reaching Out) Foundation in Cincinnati.