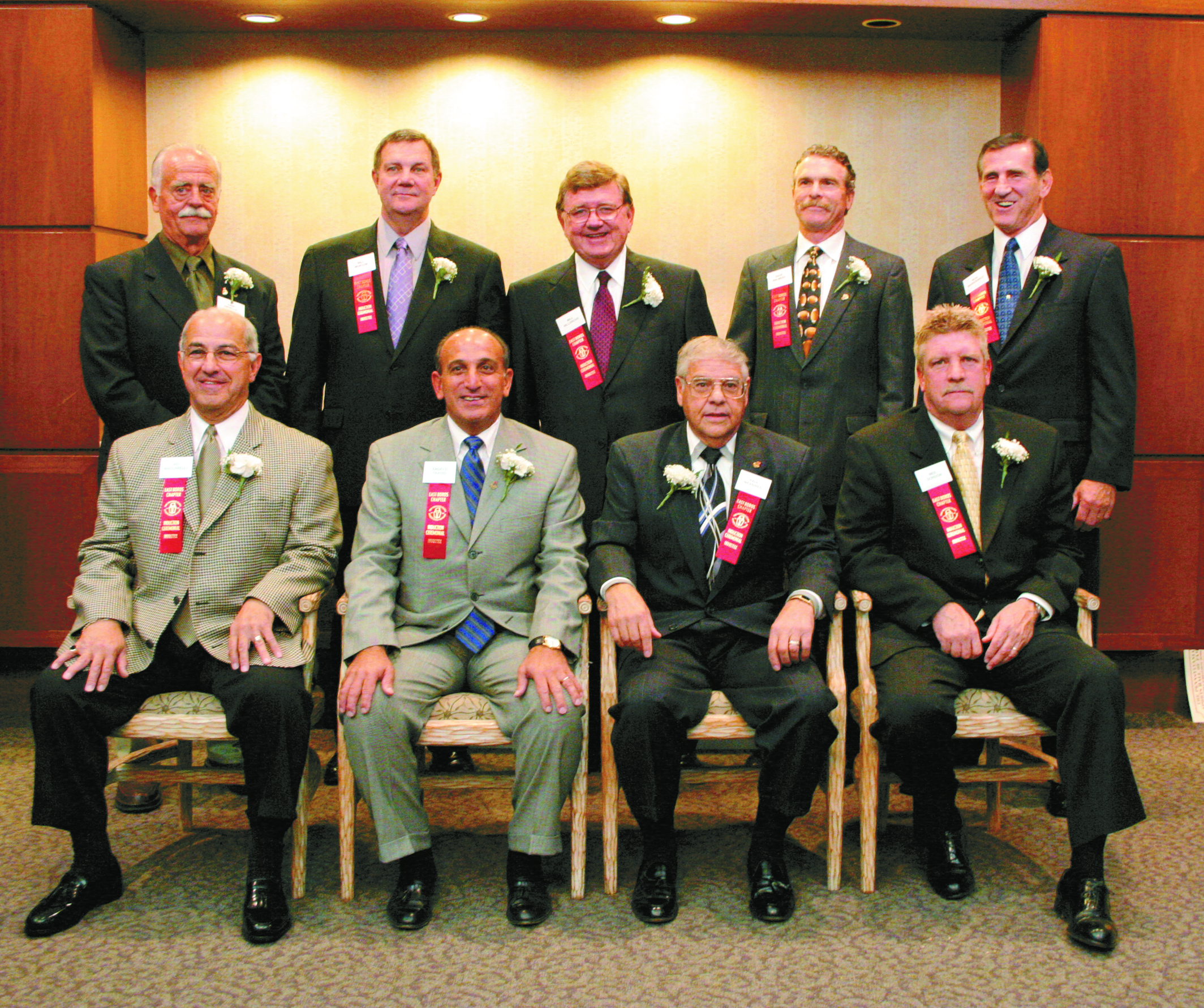 He went on to Indiana University of PA where he graduated in 1973 with a B.S. Degree in Mathematics.  As co-defensive captain, he led I.U.P in interceptions in each of his three varsity years and still holds the career interception record with 19.  His last interception was against Ron Jaworski from Youngstown State University who went on to lead the Philadelphia Eagles to their only Super Bowl appearance.

Some of his honors at I.U.P. were first team All-PSAC; first team Associated Press’ All State; third team AP and NAII All-American; and elected to I.U.P.’s  All-70’s Team. In 2003, he was elected to I.U.P.‘s Athletic Hall of Fame. He was a graduate assistant at I.U.P. in 1973, coaching the freshman defensive backs.

Sam started playing football for the Turtle Creek Midgets.  He was a 3- year starting tackle for Coach Ozzie Rometo for Turtle Creek High School.  Sam was a high school WPIAL all-star with All-State honors; starting first team offense and defense in the J.C. All-Star Game played at Forbes Field in 1957.

Upon high school graduation, he attended Arizona State University on a full football scholarship, where he played under Dan Devine and Frank Kush.  He lettered his freshman year.  During his sophomore year, Sam received a severe head injury that ended his football career.

Sam became involved in youth organizations.  He has been head coach for the Penn-Trafford Midget Athletic Association for 34 years during which time he won 236 games.  He also served as president of the association for 15 years.   He is vice president of the Keystone Bantam Football League.  Sam’s three sons went through the midget program and they all came back as coaches.  Sam has coached championship teams at all three midget age groups.

He has served on the Penn-Township Recreation board and was instrumental in building the Club House for PT Midgets; and helping  design the Municipal Park Baseball Fields, Basketball Court, Pavilions, BMX track and Skateboard Park

Sam has been honored several times in the last few years for his commitment to the youth of Penn-Township.   Honored by:  Congressman Tim Murphy; Bushy Run Lions;  Murrysville Star Newspaper-Man of the Year; America/ International Children’s Empowerment Award

Neil graduated from Pittsburgh Central Catholic in 1966 and Indiana University of Pennsylvania in 1971.  Following his football career at I.U.P., Neil received his Masters Degree and spent 11/2 years as a graduate assistant coach under Bill Neal.  Neil was hired as a football coach and social studies teacher for the Penn Hills School District in 1971.

As the offensive line coach for Andy Urbanic, Neil contributed greatly to the legendary success of the Penn Hills Football Program from 1971-1981.  In that span, the “Big Red” won four W.P.I.A.L. titles and four mythical State Championships.  Neil also coached baseball and as head coach led the Indians to a #1 state ranking and a AAAA PIAA Championship in 1978.

After a 7 year stint in sales, Neil returned to the Penn Hills School District as Athletic Director and Head Football Coach.  After two years of rebuilding a struggling program, the Indians made their return to the playoff picture in 1986.

In the past 17 years, the Indians have posted an impressive 131-47-1 record – an outstanding 74% winning percentage.  His teams have won numerous section titles, have qualified for the WPIAL Playoffs in all but two years, and won the AAAA WPIAL & PIAA Championships in 1995 with a flawless 15-0 performance.  The Indians were #1 ranked by the USA Today in 1996 for 13 consecutive weeks. From 1994 to 1996, the Indians posted the longest winning streak in WPIAL Quad A history with 28 consecutive victories.

Neil has received numerous football and baseball “Coach of the Year” Awards, has penned numerous publications on football fundamentals, and has been selected for numerous speaking presentations nationwide.  Neil was chosen as the color commentary for many WPIAL Fox Sports Championship broadcasts and was featured weekly for his Pittsburgh Post Gazette Steeler Report Card for ten seasons.

Vic’s athletic career originated on playing fields in his hometown of Pitcairn.  His 1955 baseball team came within one game of the Little League World Series, and his Pitcairn Midget football team became the 1955 Allegheny County champions by defeating the nationally acclaimed McKeesport Little Tigers.

Varsity athletics followed at Pitcairn and Gateway High Schools.  As a player on the football and baseball teams, Vic had his first association with a man who would greatly influence his life – Pete Antimarino.  This association with his “coach” continued many years beyond graduation.  As an athlete, Vic earned letters and was a starter on the football and baseball squads.  During the 1960 baseball season he led Gateway hitters with a .529 average.

In 1962, Vic was elected co-captain of the freshman football team at Indiana State College.  A guard and linebacker, he helped lead this team to an undefeated season.  During his years at Indiana, Vic earned multiple varsity letters in football and baseball.

1966 brought teaching and coaching positions at Trafford High School.  Some highlights of his coaching career include a sixteen game winning streak through the1967 and 1968 football seasons, the opportunity to coach a “Big 33” player and a baseball section championship.

After earning his Masters degree in Education in 1972, Vic was appointed Assistant Principal at Penn-Trafford High School.  In 1973, he “came home” to the Gateway School District and remained there until his retirement as a principal in 2001.

During his tenure as coach and educator, Vic implemented ideas and values gained from many individuals who influenced him as an athlete.

Vic is a member of the Gateway High School Sports Hall of Fame – a selection that helped recognize the “birth” of Gateway Athletics.

Growing up in the shadows of the steel mills, Ron began his outstanding athletic career at Braddock High School, lettering in football, track and as the starting forward on the high school basketball team winning the WPIAL Section 8 Championship in 1953.  Ron was selected to play in the 1954 JAYCEE All-Star Football game  and  received  the  prestigious  Dapper  Dan  Award  as  an  outstanding  high  school  football  player.

Upon graduation, Markiewicz went on to play football at Penn State University, under coaches Rip Engel and Joe Paterno, and lettered during the 1957 and 1958 seasons.

Ron returned to the steel valley in 1959 and began his teaching and coaching career at Homeville Junior High.  In 1968 he moved on to West Mifflin’s South High School as defensive coordinator.

In 1972, he became the head football coach at West Mifflin South High School where he remained until 1982.  One year,  he was named “Coach of the Year” in the Century Football Conference.  In  1982,  Ron  moved  on  to  coach  at  Duquesne  High School  where  the team went  on  to the WPIAL Class A Semifinal  Playoffs.

Ron  has  touched  the  lives  of  many  young  athletes  but  quietly  takes  pride  in  one  particular  player  who  sports  a  1986 National Football Championship  ring,  his  son and former PSU  player.

Paul’s career in sports began in the eighth grade where he attended St. Colman Catholic School located in Turtle Creek. He played midget football for Wilmerding. Upon graduating from St. Colman’s, he attended Patton Junior High in Monroeville for the ninth grade.

He continued to play midget football for Wilmerding until he entered Turtle Creek High, where he played three sports: Football, Track, and Soccer. Paul played guard during his senior year of high school, weighing in at only 148 pounds.

Also at Northwestern, Paul started to take martial arts classes, starting with judo and then karate. Within two years, he became a black belt (sho-dan) in karate. He taught karate in his hometown of Turtle Creek for 20 years.   He taught the Navy seals during the Vietnam War.   He achieved seventh degree black belt in Okinawa karate.  Many of the students in his karate classes were policemen in the Western Pennsylvania area.

In 1990, Paul started to shoot handguns, rifle, and shotgun in competition. He placed second in the national bench rest rifle competition in 1996.

William “Billy” Morton graduated from Wilkinsburg High School in 1968.  He earned honors and varsity letters in football, basketball, and baseball.  He received the Foothills Conferences MVP Honor and was selected to play in the Big 33 game his senior year.  Although he loved football and received numerous scholarship offers to play in college, he accepted the honor of being drafted as a catcher for the Cincinnati Reds Baseball Team.  He played baseball for two years until he was again drafted, this time into the United States Army.

While in the Army, Bill served in Viet Nam where he received the Army Commendation Medal, the Air Medal as well as the Bronze Star for heroism.  After the service, Bill attended West Liberty State College where he was an assistant coach in both basketball and football.

For the last 32 years, Bill has taught Social Studies/Health and Physical Education as well as having coached hundreds of young people.  He worked as an assistant football coach for Franklin Regional, Pittsburgh Central Catholic (coached in the first State Championship game held at Penn State University in l988) and Gateway High School.  He served as head football coach for Red Lion High School and Steelton Heighspire (both of York County) and Moon High School.  Currently Bill teaches 10th grade Social Studies at Gateway High School and is in his 8th year as defensive coordinator for Woodland Hills High School were he has enjoyed much success and contributed greatly to 3 WPIAL Championships and 2 State runner up titles.

He received his B.A. degree in Health and Physical Education from West Liberty State College in 1978. He was a Physical Education Teacher and Athletic Trainer at East Allegheny High School. In 1986, he returned to the University of Pittsburgh and received his B.S. degree in Physical Therapy. While at Pitt, Angelo provided athletic trainer services for East Suburban Sports Medicine Center (ESSMC) and Churchill, Norwin and Plum High Schools.  He was a Physical Therapist and Coordinator of the Sports Medicine Center at St. Margaret Memorial Hospital from 1986-1990, providing athletic trainer services to Fox Chapel, Shaler and Riverview High Schools.

In 1990, Angelo joined ESSMC and is proud to be a practicing partner with Donald M. Vargo, and John E. Bonaroti. Since 1984, ESSMC has provided orthopedic and sports physical therapy services to many patients and athletes in the eastern suburbs. He is proud of the dedicated service of their staff. He continues to provide athletic trainer coverage for Plum and Riverview High Schools and supervises athletic trainer services for those schools along with Gateway, Penn Hills, Norwin and Penn Trafford High Schools.

His recent activities include co-founder of the Tim Kerin Memorial Scholarship at the University of Pittsburgh and the Wagner Family Charities. He is a member of the sports and orthopedic section of the American Physical Therapy Association and the National Athletic Trainers Association.

He is proud to join the East Boros’ Sports Hall of Fame especially with his family members----Great Uncle, Shine Cortazzo; Uncle, Frank Cortazzo; and Cousins, Pat Pecora and John Cortazzo.